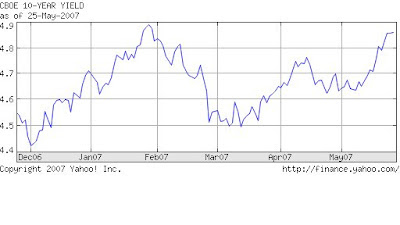 This is NOT what we want. Solid asset retail centers have been been getting more expensive since March as an adjustment to the low cost of financing which bottomed out at about 4.5% + whatever spread your local lender is charging. Deals were being financed at 5.75% for 10 year money. So caps went from 7.0 to 6.5 or lower. Now, rates are at a peak and financing is costing 6.1% or more. This wipes out most deals in expensive markets like California. It also makes deals in less expensive areas not as great. Cap rates have to rise to adjust for this. It is also a fact that sellers are less likely to react to this movement as quickly. It reminds me of gas stations and their quick and slow reaction to the cost of fuel.
Posted by Mario Pinedo, CCIM at 7:24 PM